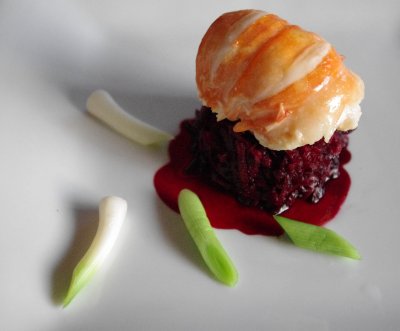 Paired with Kumeu River Matés Vineyard Chardonnay 2007 (Auckland, New Zealand), I was worried that the wine would present too much acidity, but that concern was not borne out. Pale lemony yellow, the nose showed rotting vegetation, struck flint, sweet lemon, quince, and a white floral note. The seamless palate had great balance, integration, weight (not heavy like so many Aussie Chards) and good length. To criticise, the palate showed slightly lacking flavour concentration from the mid-palate and the wine was better drunk cooler than warmer (which was a shame) – with warmth, the oak became more obvious and the quince gave way to more floral aspects. But this is very good Chardonnay. I would quite likely think it a Burgundy if tasted blind. At A$60 it represents fantastic value against the best of Australian Chardonnays. 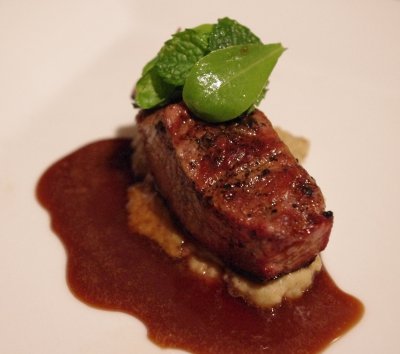 Lamb loin (eye meat only); eggplant/aubergine creamed with yoghurt and cumin; jus based on veal, red wine and the standard aromatics; baby rocket and mint dressed in sushi vinegar and just a touch of olive oil.

Paired with Wynns John Riddoch Cabernet Sauvignon 1988 (Coonawarra, Australia), which was slightly past its peak, but nevertheless showed a lovely nose of vegetable (like steamed snow pea), old leather boot, gentle spice box, a touch of menthol, and some fruit underneath. The palate has lovely medium weight (a refreshing 12.3% abv – why can’t more Aussie reds be picked at this kind of Baumé?!), good acidity, soft tannins, and the flavour of sour reds fruit (cranberry/redcurrant). The finish strangely holds its flavour on the front-mid palate and it’s a little short, but nevertheless enjoyable. A pleasant match with the lamb, with which the acidity, body and flavours were complementary. 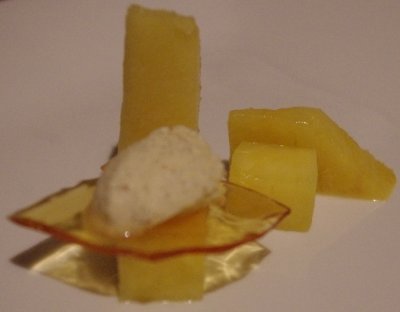 Paired with Mount Horrocks Cordon Cut Riesling 2005 (Clare Valley, Australia), one of the best Aussie stickies IMO. Mothballs, camphour and petrol on the nose, along with iris and honeyed apricots; with wonderfully balanced palate that’s fresh, not cloying or heavy at all, and with good length.
This entry was posted in Beetroot, Dessert, Fruit, Lamb, Leek, Menu, Shellfish, Uncategorized. Bookmark the permalink.